About a year ago, I became a part of a huge online community. As it turned out, a big percentage of this community consisted of stay-at-home mothers who surprisingly spent a LOT of time posting on Social Media about their daily activities. I remember thinking to myself “where do they find the time?”

As I added more people to my friends list and expanded my network, I began noticing a disturbing pattern. Most of the women who spent all day posting on Facebook, were posting comments on how they are annoyed and irritated because their kids are always seeking attention and won’t leave them alone.

They would rant about ADHD and how they can’t figure out which meds would make the kid more compliant. Some mothers were irritated by the fact that their 2-4 year old is always trying to get their attention and would not sit in the corner quietly. It would start with a few people talking about it and then others would join in on the conversation. It would turn into this huge advice thread with women telling each other which meds they give their child. They would start sharing medicine recipes and giving each other recommendations on how to “treat” the child.

I stayed quiet for a while just skimming through the posts. After a while, I realized that most of these mothers were medicating their kids because they did not want to spend the time and effort on parenting. I found it very hard to believe that out of 500 people on my friends list, 95% had kids with ADHD or a similar disorder.

I began reading up on the topic and the more I read – the angrier I got. Most of these kids were perfectly normal! Most of them just wanted more attention from their parents who didn’t want to be bothered. Some kids may need a different approach, but that does not mean that you should stuff a pill down their throat.

Every child is different and has individual needs and necessities. Unfortunately, more and more parents turn to drugs just so they don’t have to deal with their child needs. Doctors prescribe these drugs to keep the parents happy and coming back for more.

Is our society becoming too dependent on medicating today’s children? Is it sometimes easier to thrust a pill into their mouths rather than put up with their energy or train them to restrain themselves at the appropriate times?

According to WebMD, nearly five million American children have been labeled with some type of serious mental disorder. In any given year, 20 percent of children will be diagnosed with a mental illness.

I don’t wish to claim that there are never cases where there is a need for medications to regulate ADHD behaviors, but the steady increase of diagnoses in recent years (see below chart) makes one wonder if ADHD has become a catch-all for every inconvenient behavior that a child exhibits. 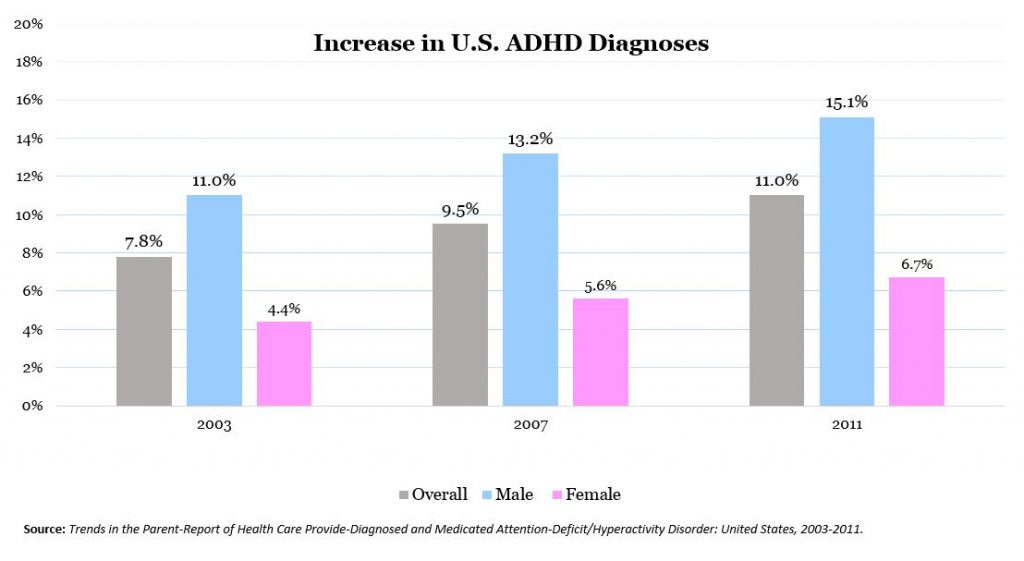 ADHD seems to have become the catchall designation for children who do not “behave well,” which is the subject of another excellent documentary, The Drugging of Our Children. One study estimated that 20 percent of children have likely been misdiagnosed, which amounts to nearly one million children in the US alone.

In 2010, the US Centers for Disease Control and Prevention (CDC) claimed that one in 10 American children had ADHD, representing a 22 percent increase since 2003.6

Many of these kids are diagnosed based on highly subjective observations of parents, teachers and guardians, and about two-thirds of those children were put on some form of prescription medication. In 2011, 48.4 million prescriptions for ADHD stimulants were written, up 39 percent from 2007.

ADHD drugs are indeed powerful mind-altering  hard-core drugs, regulated by the Drug Enforcement Agency (DEA) as controlled substances because they can lead to dependence.

ADHD drugs include amphetamines (Adderall) and stimulants (Ritalin and Concerta)7 with well-established risks, including heart attacks, strokes, and seizures. ADHD drugs can also stunt your child’s growth or delay puberty.

It isn’t just stimulants that have exploded in number—benzodiazepines (for anxiety) and narcotics (for pain) are on the rise as well, and all pose serious risks for children. Taking a narcotic painkiller for 180 days or longer can increase your risk of depression by 53 percent.

ADHD drugs, by definition, stimulate a child’s central nervous system and may interfere with the intricate workings of his or her brain and personality. In 2011, ADHD drugs were responsible for nearly 23,000 emergency room visits, representing a 400 percent increase in just six years. For example, according to the US Food and Drug Administration (FDA),8 Ritalin’s potential side effects include the following:

Fears have also been raised over other side effects of Ritalin, including severe weight loss, tics, liver damage, insomnia and stunted growth. ‘These drugs have a direct effect on the production of growth hormone,’ says Professor Kendall [the director of the National Collaborating Centre for Mental Health]. ‘If a child takes methylphenidate [Ritalin] for a year, they will lose three quarters of an inch of expected growth.

The Alternative…?
While most of us focus on exercise as a way to trim our waistlines, the better news is that routine physical activity firms up the brain — making it a simple, alternative ADHD treatment. The latest news about exercise is that it helps kids push through past failures and attack things they didn’t succeed at before. The medical journal Pediatrics published research that found kids who took part in a regular physical activity program showed important enhancement of cognitive performance and brain function. Also, mental exercises to build (or rebuild) attention span have shown promise recently as adjuncts or alternatives to amphetamines in addressing symptoms common to ADHD.
So, to all the parents out there.. Please! For the sake of your kids future! Instead of feeding them pills, try giving them the attention they seek. Instead of feeding them pills, give them discipline and structure. Instead of feeding them pills, increase the amount of physical activity your child is getting. Instead of shoving an iPad in the their face, try picking up a ball and going outside with them. Find what works for your child and stick to it and I guarantee that your child won’t need any medication.